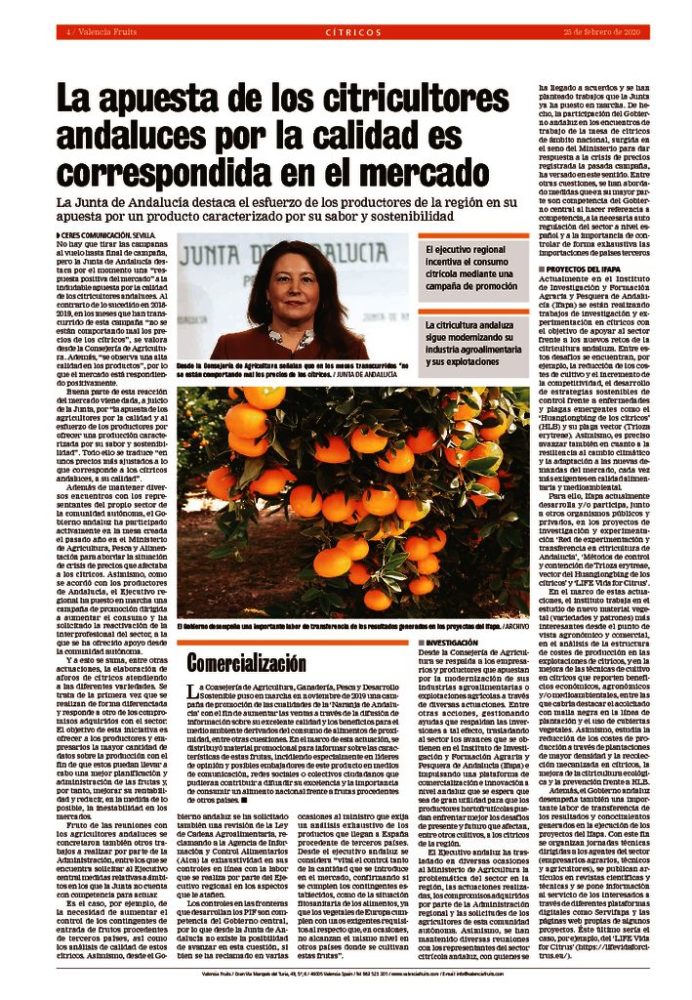 Andalusian citrus growers’ commitment to quality is matched by the market

Andalusian citrus growers’ commitment to quality is matched by the market

The Junta de Andalucía values the efforts of the region’s producers in their commitment to a product characterised by its flavour and sustainability.

There is no need to throw away the bells until the end of the season, but for the moment the Andalusian Regional Government is highlighting a “positive market response” to the unquestionable commitment to quality of Andalusian citrus growers. Contrary to what happened in 2018-2019, in the months that have elapsed this season “citrus prices are not behaving badly”, is assessed from the Ministry of Agriculture. Furthermore, “we are seeing high quality produce” and this is why the market is responding positively. Translated with www.DeepL.com/Translator (free version)

In the Board’s opinion, a large part of this market reaction is due to “the commitment of farmers to quality and the efforts of producers to offer produce characterised by its flavour and sustainability”. All of this translates into “prices that are more in keeping with what corresponds to Andalusian citrus, with its quality”.

As well as holding various meetings with representatives of the sector itself in the autonomous region, the Andalusian Government has actively participated in the table created last year in the Ministry of Agriculture, Fisheries and Food to tackle the price crisis situation affecting citrus. Likewise, as agreed with Andalusian producers, the regional government has launched a promotional campaign aimed at increasing consumption and has requested the reactivation of the sector’s interprofessional, which has been offered support from the autonomous community. Translated with www.DeepL.com/Translator (free version)

In addition to this, among other actions, there is the preparation of citrus fruit gauges according to the different varieties. This is the first time that they have been carried out in a differentiated way and it responds to another of the commitments acquired with the sector. The aim of this initiative is to offer producers and business people the greatest amount of data on production so that they can carry out better planning and administration of the fruit and, therefore, improve their profitability and reduce, as far as possible, instability in the markets. Translated with www.DeepL.com/Translator (free version)

As a result of the meetings with Andalusian farmers, other work to be carried out by the Administration was also specified, including requesting the central Executive to take measures in areas in which the Board does not have competence to act.

This is the case, for example, with the need to increase checks on quotas for the entry of fruit from third countries and quality analyses of these citrus fruits. Likewise, the Andalusian Government has also requested a revision of the Law on the Agrifood Chain, asking the Food Information and Control Agency (Aica) to carry out exhaustive controls in line with the work carried out by the regional executive in the areas that concern it.

Border controls carried out by the BIPs are the responsibility of the central government, which is why the Andalusian Regional Government has not been able to make progress on this issue, although the minister has been asked on several occasions to demand an exhaustive analysis of the products that arrive in Spain from third countries. The Andalusian government considers it “vital to control both the quantity introduced into the market, confirming whether the established quotas are being complied with, and the phytosanitary situation of the foodstuffs, as the plants in Europe comply with demanding requirements in this respect which, on occasions, do not reach the same level in other countries where these fruits are grown”.

The Regional Ministry of Agriculture supports entrepreneurs and producers who bet on the modernization of their agro-food industries or farms through various actions. Among other actions, managing aid to support investments for this purpose, transferring to the sector the progress obtained in the Institute for Research and Training in Agriculture and Fisheries of Andalusia (Ifapa) and promoting a marketing and innovation platform at Andalusian level that is expected to be very useful for fruit and vegetable producers to better meet the challenges of present and future affecting, among other crops, citrus in the region.

The Andalusian government has on several occasions reported to the Ministry of Agriculture the problems of the sector in the region, the actions taken, the commitments made by the regional administration and the requests of the farmers of this autonomous community. Likewise, various meetings have been held with representatives of the Andalusian citrus sector, with whom agreements have been reached and work has been proposed that the Board has already started. In fact, the participation of the Andalusian Government in the working meetings of the national citrus table, which was created within the Ministry to respond to the price crisis registered last season, has been in this sense. Among other issues, measures have been tackled which are mostly the responsibility of the central government in terms of competition, the necessary self-regulation of the sector at a Spanish level and the importance of exhaustive control of imports from third countries.

At present, the Andalusian Institute for Agricultural and Fishing Research and Training (Ifapa) is carrying out research and experimentation on citrus fruits with the aim of supporting the sector in facing the new challenges of Andalusian citriculture. Among these challenges are, for example, reducing cultivation costs and increasing competitiveness, developing sustainable control strategies against emerging diseases and pests such as ‘Huanglongbing of Citrus’ (HLB) and its pest vector (Trioza erytreae). Progress must also be made in terms of resilience to climate change and adaptation to new market demands, which are increasingly demanding in terms of food and environmental quality.

Within the framework of these actions, the institute is working on the study of new plant material (varieties and rootstocks) that are more interesting from an agronomic and commercial point of view, on the analysis of the structure of production costs in citrus fruit farms, and on the improvement of cultivation techniques in citrus fruits that provide economic, agronomic and/or environmental benefits, among which the black mesh padding on the planting line and the use of plant covers should be highlighted. It also studies the reduction of production costs through higher density plantations and mechanized harvesting in citrus fruits, the improvement of organic citriculture and the prevention against HLB.

In addition, the Andalusian Government also plays an important role in transferring the results and knowledge generated in the implementation of Ifapa projects. To this end, technical seminars are organised for agents in the sector (agricultural entrepreneurs, technicians and farmers), articles are published in scientific and technical journals and information is made available to interested parties through different digital platforms such as Servifapa and the websites of some projects. The latter would be the case, for example, of ‘LIFE Vida for Citrus’ (https://lifevidaforcitrus.eu/).