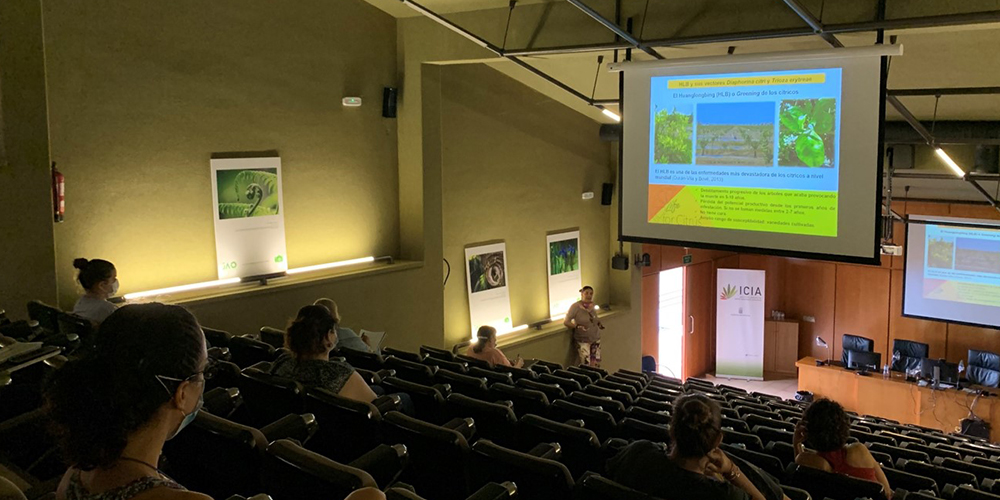 “Introduction, objectives and presentation of the activities of the LIFE Vida for Citrus project in the Canary Islands

“Introduction, objectives and presentation of the activities of the LIFE Vida for Citrus project in the Canary Islands

The ICIA Plant Protection Unit has been carrying out different research and dissemination activities on the sustainable control of the pest Trioza erytreae; specifically, in the framework of the 2018 call for projects of the “Climate Change Adaptation” programme within the European LIFE Programme, the LIFE18 CCA/ES/001109 demonstration project entitled “Development of sustainable control strategies for citrus under threat of climate change & preventing entry of HLB in EU” was approved for a period of time from 1 July 2019 to 30 June 2023.

The Huanglongbing (HLB) or Greening, one of whose vectors is the African psylla (Trioza erytreae), represents a serious threat to citrus cultivation and industry. African psylla has been present in the Canary Islands since 2002, in Tenerife, La Palma, La Gomera and El Hierro, and subsequently in Gran Canaria since 2011. It was also described in mainland Spain in 2014, and has since spread to several regions, including Portugal. It is currently widespread and well established along the northwest coast of the Iberian Peninsula, from Cedeira in A Coruña (Spain) to Pontes / Setúbal in Portugal, and has recently been detected and reported in Asturias and Cantabria (EPPO, 2020). Therefore, if more efficient control and management measures are not implemented, it is inevitable that T. erytreae will spread throughout the Iberian Peninsula, affecting the main citrus producing areas in Spain and Portugal.

As a precedent to the development of this project, the ICIA and the IVIA have worked in a coordinated way in the classical biological control project of the African psyllid in Spain, consisting of the importation, breeding and subsequent release in the Canary Islands of the parasitoid Tamarixia dryi (Waterston) from South Africa (Projects E-RTA 2015-00005-C06-00 of the State Plan for R+D+I 2013-2016). The protocols and results derived from this work are a reference at European level, and are currently being implemented in the regions recently affected by T. erytreae in Spain and Portugal.

As a partner in this LIFE project, ICIA is responsible for the implementation of different actions aimed at testing new citrus rootstocks and varieties, as well as demonstrating sustainable techniques to effectively control the spread of vectors, implementing the appropriate methodology to increase biodiversity through hedges and plant cover.

These actions are being carried out in three citrus fruit demonstration plots, located in Tenerife (Valle de Guerra and Güímar) and Gran Canaria, and are focused on: biological control in citrus fruits, management of plant cover, implementation of hedges to favour biological control for conservation, placement of insect hotels and trials with new plant material (pattern-variety combinations). The aim of this training is to raise awareness of the objectives, technical protocols and actions developed by ICIA as a partner in the LIFE for CITRUS project. Also, to refer to the expected results, which will be replicable to citrus production areas at regional and national level, with their potential impact on increasing the quality of production in this sector in the Canary Islands.